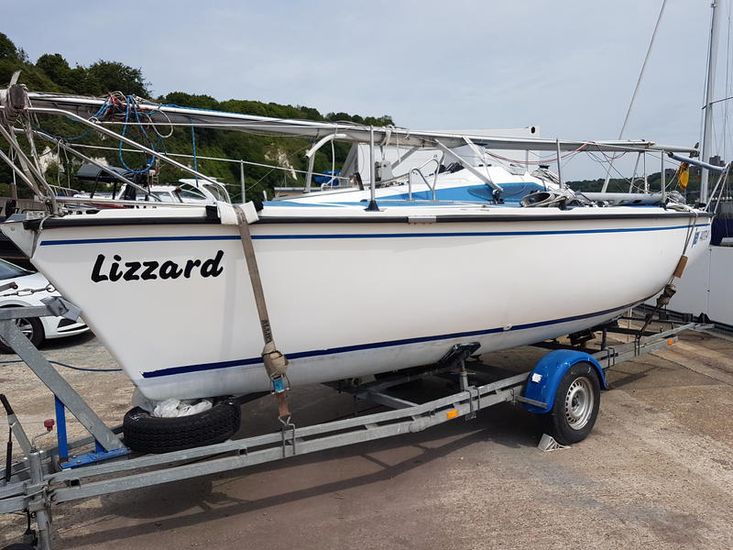 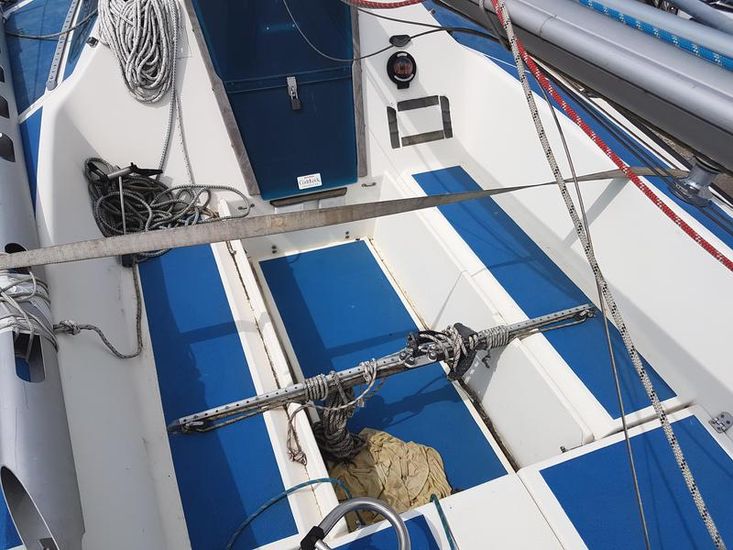 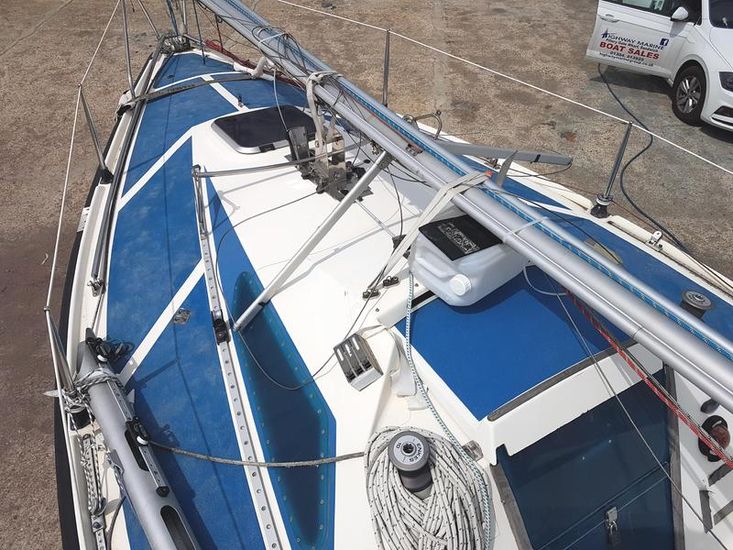 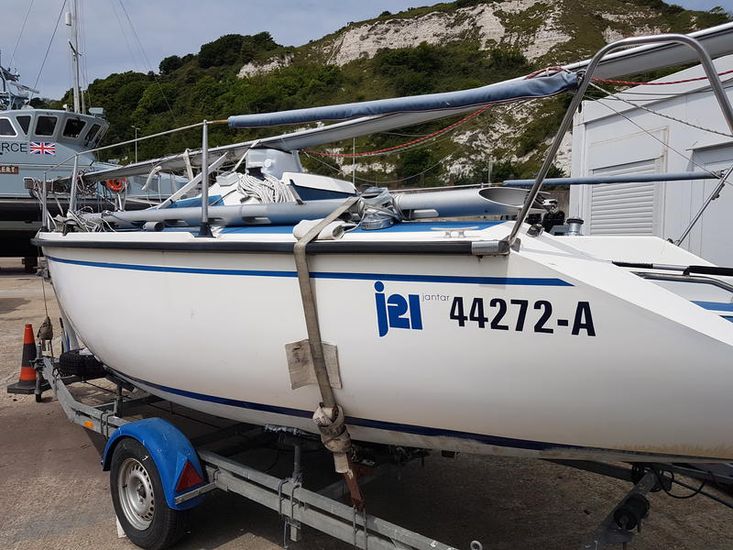 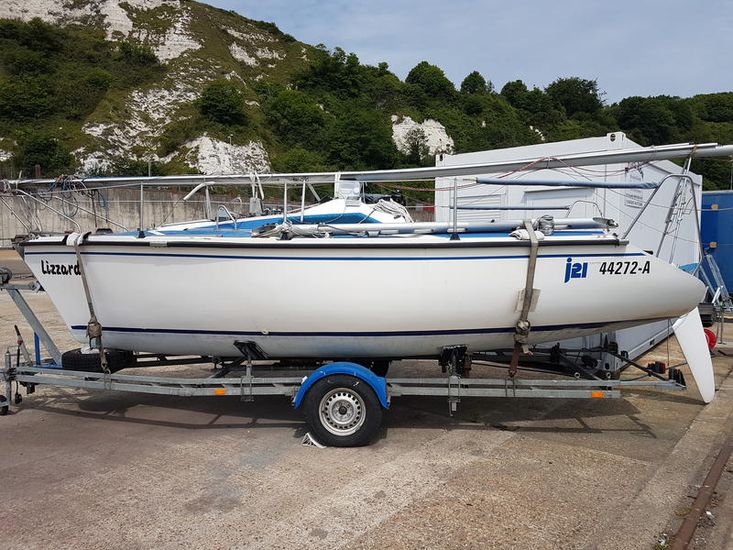 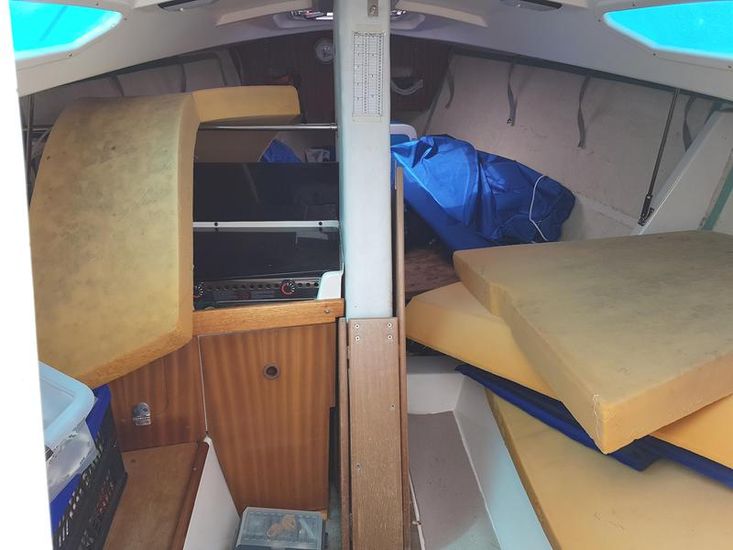 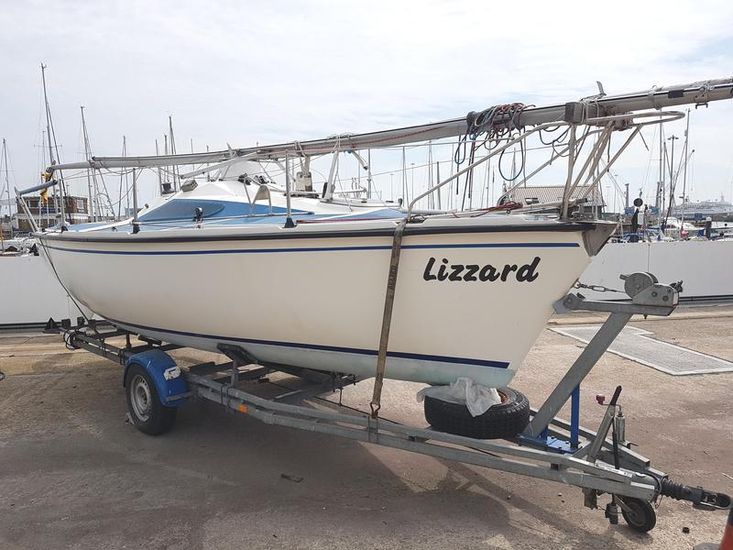 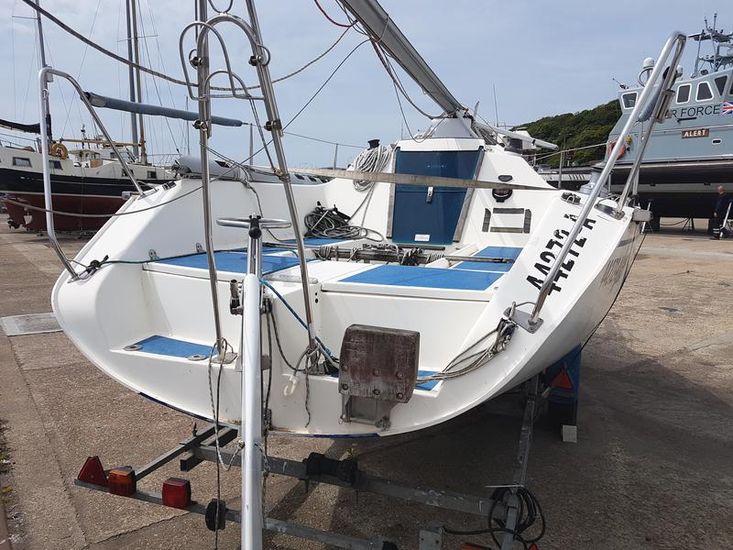 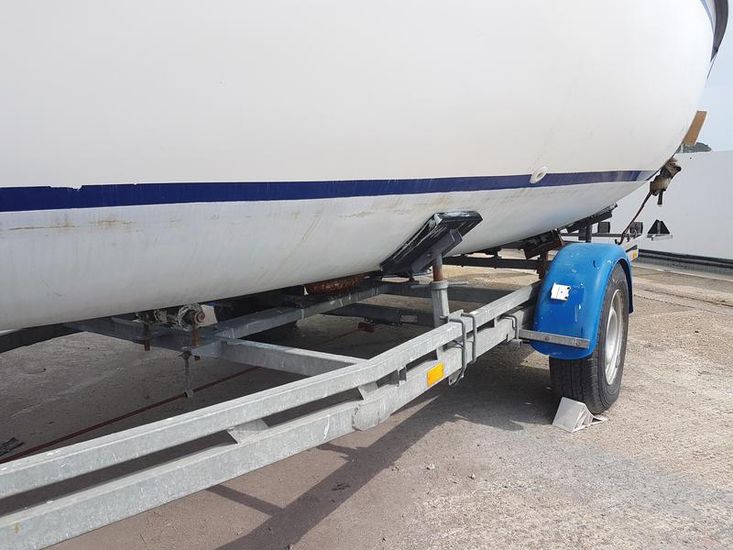 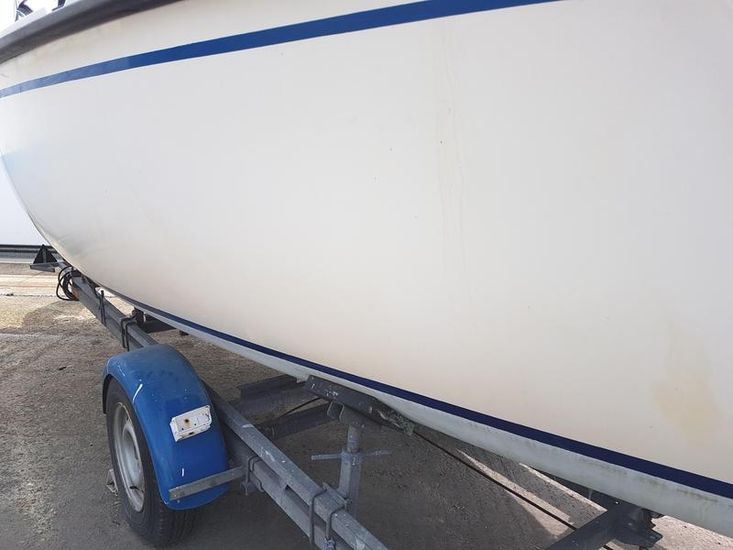 Description:
The Jantar 21 has a lifting fin keel making it ideal for use in shallow waters and drying harbours. From the outside, it has a sleek shape and a modern design. The fittings used from the shipyard are of high quality (Harken) and arranged largely functional. The size of the cockpit is sufficient for sporty sailing for 3 persons; if it is a little more comfortable, even 4 sailors can find space. Due to the small length of the boat, it is a bit narrow below deck, but remember distribution and equipment are akin to a really big cruiser.

Accommodation & Below Deck:
Below deck, the Jantar 21 is a small space wonder. In the forepeak there is a double bunk which is a bit too short for people above 1.80cm height. Above the double bunk a sturdy folding window is attached. In the saloon, there are two sitting or lying areas on either side of the companionway, one of which extends below the seats of the cockpit and is therefore sufficiently long. Theoretically, 4 sailors will find a place to sleep - but in practice it seems too tight. Under the berths there is storage space. The upholstery of turquoise-coloured fabric with Jantar 21 emblem is a matter of taste. The same fabric is found as interior lining, which is attached by Velcro to the side wall. In addition to the keel box (which divides the saloon) there is a galley on the port side with a recess for the stove and a small sink. The tap of the washbasin is at the same time a hand pump, with which water from an (optional) tank from the back box can be pumped into the wash basin. Under-stove shelf and sink is also storage space. On the keel box is a collapsible table. Below the companionway is a large drawer that provides ample storage space for odds and ends. The drawer, however, is so long and bulky that it drapes fully occupies the entire salon area, making it somewhat difficult to operate. On the starboard side next to the companionway is a cupboard, which also houses the switchboard for the electrical system.

Deck & Canvas:
On the Jantar 21 the cavity between the outer hull and inner skin is foamed. The Jantar is thus unsinkable. On the upper deck is a blue, non-slip coating applied, which is not only practical, but has really sleek looks. The crotch area between shrouds and sea fence is narrow, but sufficient. There is a large back box in the rear, which can be opened by 2 flaps. You can get 4 fenders in as well as the water tank, gas tank, padle and replacement anchor. The size of the box rather seduces to store too much and thus build up weight in an unfavorable place. The size of the anchor box is sufficient, only the opening could be larger. Wide anchors can only be stowed in the box with the stick forward. Through the anchor box you have access to a closable hatch behind which the battery sits. The Jantar 21 was built in a (rather rare) basic version and in the more common version Jantar 21 Race. The most striking difference is the boom, which is thicker in the Jantar 21 Race and has oval recesses. There are also differences in the fittings, so has the race version, in contrast to the basic form self-hauling winches and a mainsheet traveler. Since I myself own a Jantar 21 Race, the description refers to this equipment. The two winches are also mounted on the cabin roof, side of the companionway. A disadvantage of this position is the unfavorable angle at which the sheet is pulled. For strong penetration must be helped practically always with the crank. Likewise, the Vorschot, which is occupied in lee of the pusher (sitting in windward) difficult to operate. This - in itself very unfavorable position of the winches - only has the advantage that the traps and trim lines can be enforced with the winch. But there are also Jantar 21 sailors who have put additional winches on the cockpit rim.


Disclaimer:
The particulars detailed herein are intended to give a fair description of the vessel, but their accuracy cannot be guaranteed. These particulars are supplied on the understanding that all negotiations shall be through Highway Marine Ltd who are acting as brokers for the vendor. The vendor is not selling in the course of a business unless otherwise stated. The prospective purchaser is strongly recommended to check the particulars, and where appropriate, at his own expense, to employ qualified independent agents to carry out a survey, and/or any mechanical and electrical checks.

Boats for sale
by continent

Boats for sale
by country